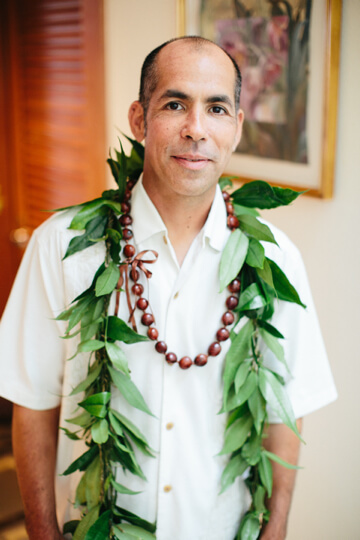 At sunrise on June 7th, 2015, Darryl E. Weiss passed away after a 19 month battle with leukemia, surrounded by his family at his home in the Ola’a Rainforest in Mountain View, on the Big Island of Hawai’i. Darryl was 44 years old.

Darryl Weiss was born in the city of Los Angeles, California on November 20, 1970. He was the third and youngest son, of Ann and Martin Weiss.

As a California native, Darryl's first home was in the San Fernando Valley, a suburb of greater Los Angeles. From there he moved to San Diego where he went to school and graduated with a BS in Information Technology from San Diego State University. Darryl worked in the IT field for several years before making his way to Hawai’i and served as the IT Manager at Kahi Mohala Hospital on Oahu for the last 14 years.

Darryl's interests and passions in life included performing as a deejay, surfing in California and Hawai’i and farming his six acres in Mountain View, Hawai’i. In this endeavor he was able to carve out a piece of paradise that brought him peace and joy every day of his life. This connection to the land was shared with his family and was a wide-open playground for his beloved dogs Kukui, Mauka, and Hina.

Services for Darryl were held on Thursday, June 11th, 2015 at his home. The service was performed by Kumu Keala Ching, who sang a series of spiritual chants as Darryl’s ashes were spread across his land. Kumu Keala Ching presided over the marriage service between Darryl and Emily as well.

In lieu of flowers, and as a way to make a more lasting memorial, it is requested that your thoughtfulness be expressed as a gift of "life" by supporting Darryl's vision of a tea farm.

Individual tea plants (camellia sinensis) can be purchased for $10.00 and will be planted by Darryl's surviving wife and family as a living tribute to Darryl's memory and eternal spirit. Darryl began his budding farm 8 years ago and through your contributions his vision of a prosperous farm will be fulfilled.

Visit this PayPal page to send money to Emily

PayPal has two options, in this case you are going to want to use the option with the "Friends and Family" button.